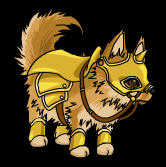 Safiria was walking Daimyo outside of my house the other day and a strange moving van pulled up on the road beside her and the creepy driver said, "Hey, can I buy your dog?". Taken aback, her eyes widened as she hastefuly replied, "No.....". Then, with sinister confidence he asked, "Do you have any more at home?". Now.... to get the "fun" answer (*chuckles* , If only he knew) this is where we would check the Database to see just how many copies of the rare Daimyo pet are owned by players. I would enjoyed with great satisfaction having seen his reaction if Safiria had replied, "We have thousands of them at the house which you can get online by becoming a Guardian for only a one time payment of $14.95.... BUT.... you will have to wait until December to get yours.... he is a rare pet."

Feb 27,2006
A production schedule... whaaaaa?
Zhoom is back (yay!!!) and we put together a schedule for the big release mentioned in the past two posts. Oishii and Cysero are working on the random dungeon art while Zhoom and I are rushing to make the engine and monsters ready. Unfortunately, once again we updated code that requires us to redo the Fire Cave and Monster Arena (See, I was pretty smart about just making one of everything until we got the bugs worked out). Talking about which... after this release we are going to work on the Character Classes! Customizable Male and Female versions of each class. You will choose from one starting class, and then be able to take advanced classes by completing quests. So if you choose to be a Mage, you earn your base Mage skills.... then later, if you become a Necromancer, you can still use your old skills in addition to your new dark Necromancer skills. Sound confusing? It will be a lot simpler once in game. Talking about confusing... we are going to make the level up process a little easier to understand by giving you a message when you get enough exp: "You will level up when you complete this Quest! Ascension Powerboost earned, + 15% chance to critical hit!". Giving a massive buff should help the soon to be leveled character get to the end of the dungeon. Question for the forums: Is there another type of power up that might be better to give a player who is preparing to level?

Feb 21,2006
By the Power of Castle <Color="#CCCCCC">Skull!
We have the power! Well, we have a random dungeon generator with working monsters (Close enough). Also, random item drops are working (even though they have not been made available yet in the Beta). Combine these two features together and you can quickly guess what we will be doing on our lunchbreaks starting next week. This announcement brings a new term to the AQ and DF message forums, the.... "Loot Table". Obviously Fire Dungeons will most likely have rewards such as epic weapons of fiery wrath and Icy caverns may yield a Frosty trinket to make your friends drool. The loot table contains all of the possible items you can obtain from a specific area. Some are common... while a few will be very rare... extremely rare.... super mega really extremely rare.... and you will be unstoppable!

Feb 20,2006
Meet Fae, Reason #2 why you should not mess with the Elemental Orb of Nature

She is a shapeshifter... well, she would be if she could learn how to control her ability. It is truly a story of "curiosity killed the cat", but for the full story... you will just have to wait for the chain of quests. Which brings us to today's progress report! I spent a good deal of time working with Oishii and Cysero on how to create art for the Random Dungeon Generator. We also made another leap forward with the game engine. It is a great achievement that DF can now do everything ArchKnight can (x 100). Which is incredibly good news for all of you waiting on the ArchKnight story to be remade. We have some ambitious plans that we are currently on schedule for. Once Zhoom returns from Nepal, we will be doing an engine upgrade and releasing multiple new dungeons and monsters in one big push. Check in daily and I will tell you what we are up to. Battle on!

Feb 15,2006
Vampires in the Washing Machine
Today I am heading to meet with Captian Rhubarb and Galanoth -- it will be the first time the three of us have all been in the same place in person. I am really excited, it should be a lot of fun. Which brings us to today's topic -- my copy of Castlevania DS went through the washing machine... drying machine... got ironed.... and then found. Dracula is suprisingly resilient! I put it back in the DS and it still works. You could try doing that with AdventureQuest, but I think the rinse cycle would be a major challenge for our desktops and laptops. But you do not have to do the wash to fight the undead -- the Paladin class has been released in AQ. Galanoth created it and released the entire project before leaving for Florida. In my opinion (heavily biased) it is the best class in the game! 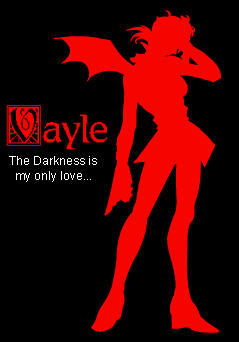 Lady Vayle, Necromantress
Forlorn, haunted, and evil are the words used to describe this dark woman shrouded in mystery. How a woman of her young age would have acquired the knowledge and skills to raise an army of the undead is beyond comprehension. Necromancy is the art of Dark Magic which and is, for all purposes… Evil. In DragonFable, the Guardians from the scores of Guardian towers across the land have sought out to destroy all Necromancers. To the best of our knowledge, there are very few of their Masters still living. Which is why Vayle confounds us… openly flaunting her powers she is more powerful than any Master we have fought before. None who have set out to face her in combat has returned to tell us more. However, we do know what she looks like and the Guardian Lore Masters recall having seen those strange wings of hers before in an ancient book. Alas, that old book was stolen quite some time ago...

Feb 14,2006
Happy Valentines Day (and SnuggleFest!)
The AdventureQuest holiday event and wallpaper have returned! The quest is sickingly adorable, but it is our duty to fight monsters for the sake of Love! In other news I am pleased to annouce that we made a new addition to the Artix Entertainment Team. This news is so fresh that the team has not even heard it yet. Our newest member is working on producing 2.5 minute action packed movies featuring our characters. Ultimately these clips will be compiled into a 30 minute pilot for a TV series. For those of you saying "No way!" prepare yourself for this next secret piece of news; experience is on our side -- our newest member just finished working on a show that is currently on the Cartoon Network. Battle on!

Feb 13,2006
New Logo
Hot of the press and yet to be colored, I wanted to share our new DragonFable Logo with you. We are going with Golds and White/Silver for the colors. Although Reds or Greens for the Dragon are certainly not out of the question. Let us know what you think on the message forums! *sits on the edge of his seat*

3 New Monsters! (Available now in the Battle Arena)
Login and be the first to battle against the SylphDrake, Ribald and Minx Fairy. You can also take the new Twilly pet with you on the adventure... while this may be the most adorable round of monsters, it is certainly not the last. We have at least 10 more diabolical monsters on the way. Also, the screenshots page has been updated. Battle on!

Update: The bug that prevent your character from earning Gold in the Battle arena has been fixed.

Feb 9,2006
PriCODEial Ooze
This week I feel like a Monkey sitting in front of a Quantum Space Time Reactor trying to figure out why the triangle shaped object does not fit into the square hole. Yes, this is a brand new engine that has never before been used... and it is reasonable that I am going to be a newbie for a while. But wow, making these first cutscenes is hard work and it is tricky remembering how everything works! With time I will either find the square object I need... OR I will re-code it so the triangle fits! In other news... Chapter 1 promises a little Moglin punting. You would not believe how much of the scripting language we are changing to accomidate the "ArchKnight story telling style". Which raises an interesting question: How old should Ash Dragonblade be in DragonFable? He was somewhere between 15 to 18 in ArchKnight... but we could make him a lot younger in DF (Which would help explain a lot about why the villagers and villians do not take his quest to become a Knight seriously) and he would make a great sidekick for your DragonFable character. What do you think? Let us know on the message forums! 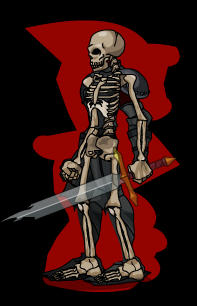 Today we get to talk about DragonFable's undead! My personal favorite topic in the entire world. To the right is the Skeletal base model (with dark armor behind it to demonstrate sizing) for DragonFable. But the undead are more than just skeletons. First there are your major classifications:

Corporeal
Undead that are solid and you can hit them with a stick. Includes: Ghouls, Skeletons, Zombies, etc

Incorporeal
These are undead that do not fully exist in our world and would most likely walk through them. Examples Include: Ghosts, Phantoms, Specters, etc.

I would like to make everything from Vampires to Ancient Mummies to test your personal knowledge about the supernatural. Sure, there will be in game clues for anyone who has not rented out of the horror section of their local video store. But given how many different ways undead monsters (lets use Vampires [Vampyres] as an example) are portrayed in movies, we could make a boss of each major kind and let you explore their castles battling through countless ghouls and cryptkeepers to find a way to expulse the evil. But first, lets talk about... resistances! Everything in DragonFable has a resistance... even Healing. This is important when talking about the undead because many creatures of the night thrive on Darkness. Darkness may heal them. Sunlight may hurt them... and in the case of Zombies and Skeletons... casting heal on them might hurt them! It would be truely interesting if a member of the undead were to join your party for some period of time. Disregarding the smell, imagine the awkwardness of having an ally that you could only heal by casting a devastating darkness spell at.... this is going to be fun. Battle on!

Feb 3,2006
New Monsters coming next week
Freshly animated and now in the coding phase: The Wind Elemental, Water Elemental, Evil Giant Scary Spider, Cute little Fairy, Wolf, and Lizardman. There are also a slew of new weapons and items to go with the new Starting Town that is in the works. There is a huge electrical storm here today and the power is flicking. But the good news is that I am finally done with meetings this week and back to doing "real work".