talked and sang ALOT this weekend.

I Dare You to Watch the Next One!

So, this past weekend, Rolith rushed home because he had some action-packed plans!

He was planning on doing a game-making challenge where programmers have 48 hours to make a full game.  You might remember in December when he and Artix each made a game in 48 hours.  This was the same kind of contest, but this one was a little different. For a couple reasons.

2) It was a team challenge, so Rolith could get help from other AE team members.

3) His Ustream (live video-streaming) showed him making the game, and this time we had an audio hookup so we got to talk to you guys all weekend!

At 8PM Eastern, Rolith went to the challenge homepage and found out the theme.  He immediately went to the Ustream chat-room where dozens of you guys were already waiting to support him.  He told you the challenge and asked for ideas!

Between the 35 of us in the room at the time, we came up with a steam-punk spring physics action game called 1888.  (Unfortunately, Zeronius' idea for a steampink game- it's AMAZING what ideas a typo will give you!- was shot down, but I just told Beleen about it and she LOVES the idea! So who knows what will happen with that?)  It might eventually look like steampunk art, but for now, it's got placeholder art made by Randor the Red (thanks Randor!). 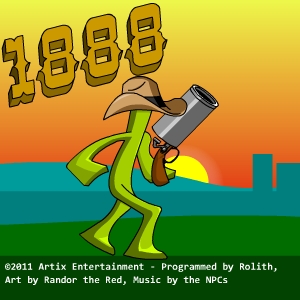 This is George. George bounces.  George used to be just a smiley face until Randor the Red stepped in and sent Rolith some awesometastic art to use!

Rolith wrote line after line of code while about 60 players sat and tested version after version throughout the weekend.  While you guys chatted online, Rolith and I responded vocally to your questions and comments thanks to the audio feed.  I sang song after song suggestion ("Still Alive" and "Bohemian Rhapsody" were my favorite suggestions), told stories about the Lab, gave teasers about DragonFable's Ravenloss storyline (AND managed not to give out a lot of spoilers), and was, in general, completely random, all to keep you guys entertained while Rolith worked on bugs and coded.

It was a BLAST!  We had SO much fun!  And you guys seemed to be having a pretty good time, too! And an educational one.  I mean, who wouldn't want to learn more about coding a physics engine in Flash?  Which you did if you were watching us, since Rolith wrote the code before your eyes!  He even got some code suggestions from a helpful player watching chat.

And if you weren't there, you missed the creation of MANY new memes (like "Peanutbutter Kitty Time!" and "RAGEBURP")!

We saw a lot of familiar players and MANY ones we didn't recognize.  Players from every Artix Entertainment game streamed in from the forums and Twitter to spend the weekend chilling, coding, and chatting with us which was pretty incredible!  Thanks to all the Beacon of Hope members who showed up, too! (Hope you guys are excited for the Ravenloss war coming next week!)

Soooooo... want to test out the VERY barebones version of 1888 that Rolith coded this weekend? (About 24 hours of total code time, with breaks for eating, sleeping, and playing with the kitties) Then click on the following link: 1888 on the EbilGeek.com website
(EbilGeek.com is Rolith's personal website. It's safe for you to go to.)

Hope you enjoyed this look at our weekend, and we hope to see YOU at the next live video-game making challenge!  We'd like to get more staff members involved in the next one, so if you're interested in seeing us do another one, let us know on the forums and Twitter!