Hello!  It's Monday, and we've got some BIG plans for this week!  But first let me tell you about the big plans I had for dinner last night, and the even BIGGER mistake I made.

My mom and grandma have cooked up some great recipes over the course of their lives, and recently my mom sent a bunch of them to me.  I thought it'd be fun to try making a few of them.  A few weeks ago, I made American Spaghetti for me and Rolith.  That was a great success, and both Rolith and I loved it.  Now, the Macaroni and Cheese I made last night, on the other hand... that did not go so well.

What happened? That's very simple.  Typo-demons in the recipe.  You know that here at Artix Entertainment, we have a fond relationship with typos; we make them, fix them, then make more. And then fix THOSE!  So I was very familiar with typos.  But I didn't know before making the mac and cheese that there WAS a typo in the recipe! And it was a very, very, very bad typo.

My mother's recipe called for FOUR POUNDS of shredded cheese! (For comparison, you can get a bowling ball that weighs four pounds, or a medium-sized chihuahua.) That seemed like a lot to me, but I always remembered her recipe tasting very cheesy, so I shrugged off my doubts. I could only fit three pounds into the recipe, but I thought it was close enough.

It turned out... interestingly.  It was VERY cheesy. Not bad.  Rolith had a second helping, and Beleen wants a whole bowl of it (she does love her Mac and Cheese!).  But we have SO many leftovers!

As for the typo... after calling my mom and telling her about my culinary adventures in dairyland, we realized that she had meant to type four CUPS of shredded cheese.  Four pounds is much, much, MUCH more! (Four cups of cheese is 2 bags (half pound bags). Four pounds of cheese is 8 bags!) 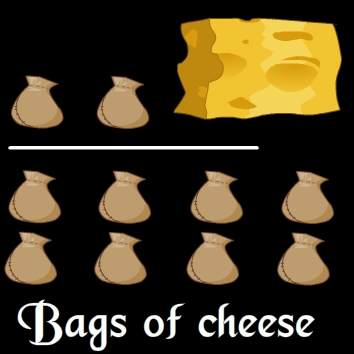 Anyone up for four pounds of deep fried macaroni and cheese squares? Because that's all we can think to do with the leftovers.  I'm not really sure what lesson to take away from this anecdote, besides never trust my mom's memory! (You probably won't encounter that particular situation, but always doublecheck your mom's memories, just in case.) In closing, this recipe has definitely left me cowed.

On to what to expect this week:

We've got some new content for Willowshire planned, so if you've enjoyed that new town, get ready to head back!  Maybe a quest, maybe a shop?  It's only Monday, so not even WE are quite sure what will go there yet, but it'll be fun!

You guys asked on the forum for more Player Suggestions, and we love giving you what you want (when we can)!  Looks like Lim will have some work to do; we'd better get ahold of him quick!  He's loving being back to school, but we really miss him at the DragonFable table. Sadface for SCIENCE!

Talk Like a Pirate Day is coming up, me mateys!  Yarrrr!  (Note to self: you sound very silly when you talk like a pirate. Don't do it outloud. Wear an eyepatch instead and call it a day.)  We'll have a shop with some new-old things and some new-new things, so grab your gold doubloons and be prepared to spend, spend, spend on parrots and pirate hats!

Ravenloss is BACK!  It's been a long hiatus, but the search for the Equilibrium Gate keys will continue this week in the Dark Tower Penitentiary!  You'll be searching for the Icicle Key AND Riadne, since at the end of the last quest, she was captured by the ChaosWeavers.  If you've forgotten what's been going on with Tomix, Greed, and the Chaosweavers, now's a great time to replay the chain and refresh your memories!