It's Friday again!  (How is it Friday again so QUICKLY?!  I am all behind from having Monday off.  Anyone else have that feeling, or is it just me?)

But not to fear! I may be behind, but our release certainly isn't! We've been working hard these last four days to bring you the answer to an important question and more than a little bit of suspensefulness in the DragonsGrasp quest. So lets get right to the details!

In the Dragonsgrasp quest this week, we'll pit the dastardly Circe against the infamous Vilmor as you and Vilmor race to catch up with Circe as she tries to lure you to an unknown destination. (With a cast of characters where EVERYone is hiding something, things are definitely not what they seem, and it's up to YOU to figure it out!)  Geopetal has some devious plans in store for the ending of this quest, so you'll DEFINITELY want to make sure you're caught up with Vilmor's storyline so that you can play this week!

And in "Alina's Answer," Rolith waits (im)patiently for her to respond to the question he posed last week.  But before she can DO that, they're interrupted by- you guessed it!- TOGS!  What you might NOT know is that Rolith and his tog companions really do care for each other (they think the Togicides are FUN. Togs are weird.) and when they heard Rolith was proposing to Alina, they got VERY jealous! 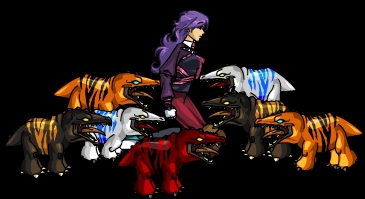 Now, togs are not that smart (obviously), and so when they pooled their collective ideas, all they could come up with was to keep Rolith from Alina the only way they knew how!  Captain Rolith needs YOUR help, hero, in order to rescue Alina! And just because he's so invested in this quest, he's coming along with you to help! (Yes, that means Rolith is now a guest that scales to your level and damage! He is a super-strong Knight Captain!)  Are you a champion of love or a fan of frustrating Rolith?  For our sakes, HELP ROLITH!

I'm still recovering from catching some Con-Rot (tm) sickness, but I promise that next week things will be back to normal.  Or as normal as they get here in DragonFable!

PS: In Alina's Answer, you'll hear barking togs.  You might remember them from the Popsprocket chain.  But if you've forgotten, let me remind you of one of my favoritest things Ghost has ever done with sound: he recorded his mother in law to get the bark!  XD!