Happy Anniversary to Eric Greydawn and Lady Greydawn! In celebration The Lady*   has a new inventory of color custom cloaks! These cloaks will be seasonal rares, so make sure to check them out before Monday. 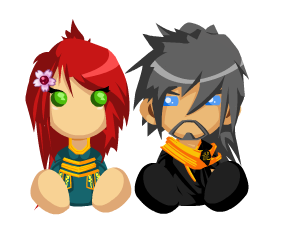 Two years ago, I spent the night before our wedding online playing DragonFable.  Our alarm clock wasn't working and I needed to be awake to make sure that Lady was up early enough to get ready for the wedding.  DF has been a part of our lives since before we were married, and since we got married the forums have been really good to us.  We would like to thank you all for being a part of our lives, both before I became an intern and after.  You really are the greatest gaming community of all time!

2011 AE Calendar Giveaway!
Check out the AQW Design Notes today to get the details on how to get your hands on one of four calendars! Full rules for the contest can be found on the Portal site.

Dragon*Con!
This weekend the whole Underground Lab is getting transported to Atlanta for Dragon*Con! The official AE Panel is Friday, September 2nd from 2:30 to 5PM in the Savannah Room of the Sheraton hotel. We'll also have a fan table in the Hyatt** where you'll be able to meet AE staff all weekend!

This Friday!
The next quest in the True Mortal saga is expected this weekend!  Eric Greydawn, True Mortal and Tomix have been hard at work on it and it's chillingly awesome.

Keep in mind we will be putting the release out from Dragon*Con, but minimal dragon battles are expected.***

*Visit Serenity at the Inn to "Sleep Until Evening" and then run north towards the Tower.
**We won't know exactly where until we check in Thursday night.
***Artix is taking his full set of Paladin Armor just to be safe though!