thinks string is the thing!

It's Friday!  We've been working hard- going through dozens of cups of coffee, boxes of donuts and pizza, bunches of bananas (hey, a codemonkey's got to stay healthy SOMEHOW!), and a whole container of TableGum- all week to bring you some awesome new quests, cutscenes, and rewards!

Zorbak is a VERY sneaky moglin, with many hidden motives.  You left last week's Resident Sneevil: Genesis quest wondering just WHAT he was up to, and THIS week, you'll find out!

We may be answering some of your questions, but you can bet we're going to raise some more!  (Gotta keep the suspense up, right?  It IS almost Mogloween, after all!)

And if you're a fan of the Cauldron Sisters, then this is your week!  The Tactical Assault and Reconnaissance Team is making their first appearance in Resident Sneevil, and with their ready, willing, and bubbly attitiudes, you can bet they want to help you out!  So take one or two of them along as guests as you make your way towards the Parasol Corporation's control room!

Things are getting Stringy in the Clashening!

(That's better than getting sticky, right? Ew.)  Lim is all atwitter about a new theory he's heard of, but he doesn't quite understand it.  He wants to investigate String Theory more, but to do that, he needs your help!

Help Lim map the stars by taking his telescope up to the top of the mountain (3 peaks to the left of Zeuster's mountaintop!) and mapping the stars.  While you're away, fighting Shooting Stars and the Soaring Puce Person Nommer (sure looks strange to me!)...

...he'll be readying MILES of string (he's not just stringing you along, he REALLY wants to build a model of the universe in thread!).

Next week is the LAST Clashening quest, and boy do we ever have a surprise planned for you guys! (Not a war, sorry!  We think what's coming is even more awesome!)

If you've already done the Clashening's Velocity quest starring Clyde the Carrier Turtle and the Rabbitizer 6000 Mach 2, you MIGHT want to re-run it, because we've added some drops to it!  That's right, Clyde and the Rabbitizer pets have been added as rare drops to last week's Clashening quest, just like you asked for!  (Because we love giving you guys what makes you happy! /grin) 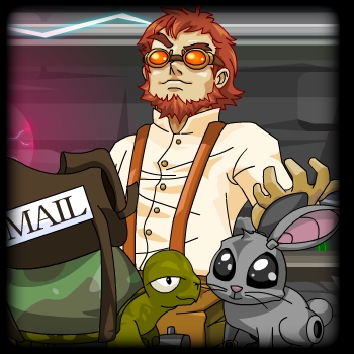 If you don't feel like farming for the level 53 and 33 pets that drop from the quest, you can buy level 60 and 40 versions in Lim and Cysero's Clashening shops for Dragon Coins!

We can't thank you guys enough for your support and all the comments and feedback you've been giving on DragonFable, our other games, and the new and upcoming games and merchandise we've been telling you about on the Design Notes and Twitter!

We've got a LOT planned for Mogloween, not to mention the Stone and Nature Orb storyline coming up, the end of Ravenloss and the Clashening, and the finale of the Darkness Orb!  So if you haven't gotten a chance to help support DragonFable, then this is a great time to upgrade your account and become a DragonLord or buy some Dragon Coins!

We hope you have a GREAT weekend!  Enjoy the release, and make sure you check out BladeHaven* (our first BattleOn Portal minigame) and HeroMart (our very own online store stocking ChickenCow T-shirts, CDs, and artbooks)!

* You'll get a BladeHaven Beta Badge on your Master Account achievement page just for helping test!  Be among the first to play our newest game!