The Tale of the TableGum

It is a story shrouded in insanity.
Gather around, gather around!  It's time for a wond'rous and adventuresome tale.  A tale of luck, of chance, and- most importantly- of TableGum!

Your normal fireside storytime will have magic and might, heroes and tricksters, and possibly flaming napalm-like marshmallows (the ONLY way to eat them!) and other tasty half-charred snackfoods*.

But this is not that story.  No, for today you will learn the wonders of TableGum, an object either revered or despised, depending on just what you hear when you shake its container.

Now, I should begin at the beginning, as all good tales do.  And that means starting with WHERE the TableGum sits: the DF/AQW table in the Secret Underground Lab, 40 levels belowground in a land where mosquitoes and moths are the size of mice and where the sun sleeps, but the heat never truly dies.

The DF/AQW table is shared by Lim, Beleen, Cysero, Rolith, and me.  It's a happy table, full of laughter and oft-repeated memes**. One day, not very long ago, but long enough that it has faded into the misty land where memories live, Rolith brought in a container of gum (he was sure 60 pieces would last a while.  How wrong he was) and placed it squarely in the middle of the table.

It was not YET TableGum; we did not fully realize the honor that would coat it in a thick, creamy covering of glory.  The gum was eaten, piece by piece, until only one remained.  And one fateful day, Cysero shook the bottle and out fell the last piece of gum.  Little did we know, but on that day the legacy of TableGum began. 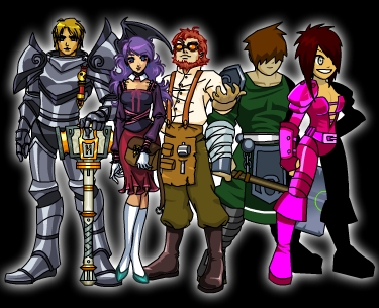 Cysero came in the next day with another container of gum, to make amends for having eaten the last piece.  And, as occasionally happens here in the Secret Underground Lab, a random occurrence takes on a life of its own***.  Rules began to spring up around who had to buy the next container of gum, and the pieces of gum as a whole were dubbed TableGum.

1) Offer EVERYone who walks into the room a piece of TableGum. Especially if they are unfamiliar with the rules of TableGum.

2) If you take the LAST piece of TableGum, you must buy a new container of TableGum.  Even if you do not normally sit at the Table.

So far we have gone through almost 2 containers of 60-piece TableGum barrels.  Artix almost fell for the last piece of TableGum at D&D one night, but he is a wily paladin, and managed to evade Cysero's attempt to get him to take it.  Who knew paladins had +5 resistance to Shenanigans?

The question remains, and is ever present in our thoughts: WHO will be the next to take the last piece of TableGum?

This week's release news!
We have TWO quests for you this week!  A DragonsGrasp mini-game that is really on a roll and the next Nythera quest!  Guide Nythera through the Realm of the Underworld and help her finesse her way through an encounter with Death himself!

Ghost is on vacation (lucky Spectre!); Lim is working with Rolith on the minigame and on resources for an upcoming release, while Tomix works on the final new skills for Void Nythera (coming NEXT week!).  Geo is writing ahead and I'm working on this week's release as well as the secret project. (Aaaaalmost done!)

Have a great week, guys!

* Cysero has assured us that yogurt does NOT do well over a campfire.  Socks, on the other hand... do REMARKABLY well over low but consistent heat.
** Have you ever gone a whole day speaking ONLY in memes?  We do on a regular basis!
*** All hail the Ficus!