The date is just right... almost Friday the 13th but nooooot quite. The darkness and shadow of unluckiness swirls but your own luck can still hold out. You need to find out more about Valtrith which means finding the lost tomb of his warrior clan... and an old friend might be willing to help you out! 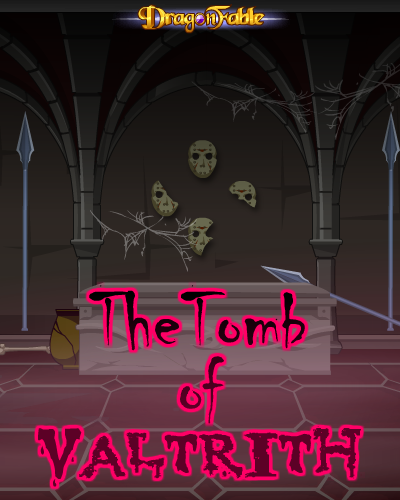 For 600 years the Tomb of the warrior clan of Valtrith has held its secrets and its treasures. Generations of Valtriths have had the honor of hanging their masks, broken in battle, upon the walls of their tombs. At least until Jaysun.... Just who took down the mightiest warrior the Valtrith line had ever seen? A man whose innumerable broken masks covered the walls of his resting place... whose cruelty in battle was spoken of in whispers long after he was gone... and before he was awoken?

As you explore the tomb be on the look out for anything that might tell you more about Valtrith and his clan. Even the most innocuous thing you mouse over or run into might give you more information (reminder: mouseover text appears in the lower right corner of the interface).

What secrets rest in the Tomb of the Valtriths? Will you find something to bury Baron Jaysun Valtrith once and for all? Or will what you find bury you?

Ashendal here! Poking my head in just to give you all a quick note. For the final day of this year's birthday week you get two things!

Verlyrus added a LONG requested feature. Buttons to scroll up and down on those panels that you can't really see everything on! This should make the Resistance and Status panel, merge shops, and a few others places, a LOT easier to read now!

I also did some tweaks to the Dragon Lord armors! They are now fully tier 3 armors and very, very, tanky. (Even more so than they were before)

That wraps up the birthday week. I hope you all enjoyed the gifts and I really hope you enjoy today's quest! (Don't get lost!)