PREVIEW: Sil, a town in ruins.

This week is kinda weird for your friendly neighbourhood ghost. Eric, True Mortal, and Tomix are working on bringing you guys a new quest this week in True Mortal's saga, Geo is busy with cleaning up Chapter 1, Rol is super busy with all the crazy codemonkey stuff that he usually has to do, and I.. well, I got to work on whatever I want basically.  /grin

Now, if you guys know me at all from hanging out on the forums you know I love to make new places for you eager adventurers to explore. Stuff like the walkaround zones between the towns and quests like Blackwyn Tomb.. and so I put a lot of thought into what I could do with a week and I came up with: 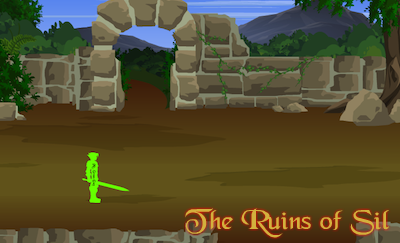 Cool, right?  You might have heard Sil mentioned in the game somewhere if you've been keeping your eyes peeled. Now… this will NOT be coming out this week, I just wanted to give you guys a little preview. In fact it is such a big undertaking that it might even span more than one quest.* This place, if all goes according to plan, will be a big old fashioned labyrinth/dungeon crawl (sort of like Blackwyn was, only bigger) with lots of secrets to uncover. So get ready, adventurers. This is going to be fun!

*Gets hit by Rol's hammer.