From Timelines through the Tournament of Champions, and more, this month's Reimagined release has arrived! 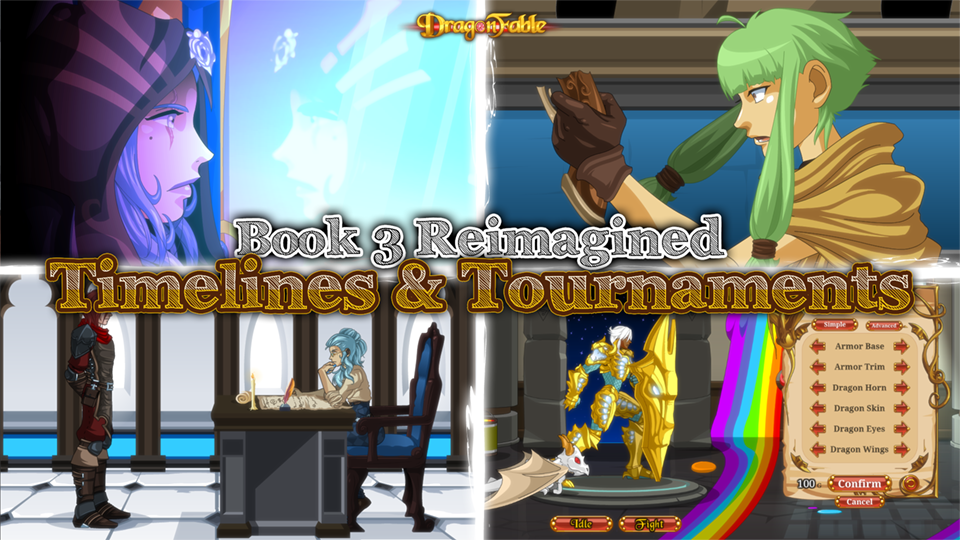 This week, Dove and Dracelix were feeling under the weather. Plus, it's about time they had a break! That said, they still managed to help out with some updates.

The quests Unbound and The Beast have been adjusted to properly use x-maps. (Layer above the player, for dialogue, etc).

Timelines has been rewritten and has also been adjusted to use the x-map. As part of the rewrite, the walkaround and combat portion of the quest has been removed. Since the quest no longer has combat, the gold cost of the rewards (Seer's Ring) has been reduced to 0.

Tournament of Champions (Part 1) and (Part 2) have been rewritten to better fit the timeline and story. This includes typo and punctuation fixes, along with the adjusted script.

Circe, in the Bk3 Swordhaven main square, will now also let the player directly access the Tournament of Champions (both parts) from her dialogue.

The rewards from Timelines and both parts of Tournament of Champions now have level 90 versions. All of the rewards now also have numerals to denote their level.

There are still a number of cutscene issues in Tournament of Champions (Part 2) that we would like to address, but were not able to get to this week; such as when Akanthus walks away, King Alteon's positioning relative to Rose Guards, and the hero's size.

You can access all of these quests from Book 3 Swordhaven.

Next, The Armor Paint Fairy Room!

The Armor Paint Fairy Room has been updated! Besides the new coat of paint...

The Armor Paint Fairy Room is accessible if you have a Dragon Amulet from the cliffside portal in Falconreach.

A new cosmetic version of the Self-Containment Unit is available from the end of In Search of Slayers. Despite being cosmetic, it serves its purpose perfectly fine, in case you're not high enough level to use the others, or, if you don't want to repeat the quest to find the appropriate leveled helmet.

It's been a long year of DragonFable releases. From the Northlands Rift, to AdventureFriends 2, from the end of Maleurous Saga, to the many arena challenges, thank you for joining us along the way.

But there's no big celebration for the end of the year because, well, it's not really an end. It's another step in DragonFable's journey. One that will continue next week, next month, and next year and beyond.

There are plans going forward for post Book 3 content, and there are also other things going on behind the scenes that we will hopefully be able to reveal in the coming year.

And it's thanks to all the players like you, and your support of the game, whether that is through Dragon Coin purchases, social media posts, fanart, stories, or even just checking in and playing the new releases every so often— it's thanks to you that we've been able to not only continue to do well, but thrive.

So, from everyone on the DragonFable team, thank you. And let's make next year another one to remember!

And that's all for this year!