has some good news.

So.... anyone want to test SoulWeaver Class?

Before you get TOO excited-
Oh, who am I kidding, go nuts! Get excited! You've waited a year for this!

There IS one caveat, though.  The class isn't done.  We're gearing up for the end of the Ravenloss Saga and we want to get what we have of the class out to you for testing so that you can preview it! (Especially since so many of you have been anticipating it for so long.) 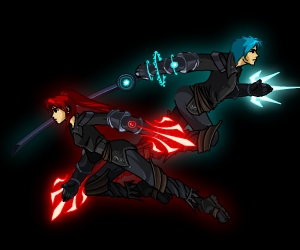 So, here's what you WILL be testing this Friday:

And here are names for SIX of the EIGHT skills you'll be testing this Friday:

And if you're willing... Tomix and I would like you to help us come up with names for the other two skills.  Here are descriptions of the animations:

What do YOU think we should call them?  But that's not all we need your help with!  Tomix is looking for ideas for the last two skills (number 13 and 14).  We'd like your input on those, as well!  Give us descriptions of the animations and what they'll do, and we'll see what WE can do to put them in-game!

We're REALLY excited to get this armor out to you for testing! It's one of the most anticipated classes we've ever done.  We're still talking over some of the features we want it to have, but we're sure that you'll gain the ability to weave MANY new tales for your hero once you equip this armor after we finish it!

Have fun speculating on what the class will be like!  We're just as excited to have you guys test this as YOU are!

UPDATE: Good news! If you don't have a Dragon Amulet on a male character but still want to be able to test the SoulWeaver armor this Friday, Rolith says we can make it so that female characters can test the male armor without you having to change gender!  Everyone give the codemonkey a banana!