It's the End of the World as We Know It!

And I feel fine!
No, no, just kidding.  That describes the end of the LAST Nythera Saga!  This one won't destroy anything.  We hope.  It all depends on you, and if you can help Nythera achieve her ultimate goal: reuniting the Creatioux and Decadere!  Can you tame the Decadere?  Will they bow before Nythera's might?  (Not to mention her AWESOME fashion sense.  Who doesn't love a good pair of purple feathery shoulder-things?)  You'll see this week in the Nythera Saga: Rise of the DragonMage finale!

Ghost is working doubletime on the Nythera cutscene AND the project I'm going to tell you about in 2 or 3 sentences.  The Nythera quest will drop some REALLY nifty Void weapons that Lim made this past weekend.*

Ok, maybe it was less than three sentences.  But onwards and upwards (or outwards and downwards, if you prefer those directions instead), because as I type, the construction of a brand new town is taking place!  Those poor construction moglins have assembled another unit in... Willowshire!  You'll finally get to find out what happened to the Falconreach stable! No, we did not leave the stable door open for the horses to escape. It's MUCH more fun than that! /widegrin

As always, we are working ahead to prepare for future releases.  And speaking of future releases, with the end of the Nythera Saga this week, you'll see the return of the Clashening and Ravenloss in the next couple of weeks!

Also, half of the DragonFable team is heading to Dragon*Con next week for crowd-filled fun (and crowd-borne germs. I REALLY hope no one gets the Con plague this year!).  We'll be having a panel on Saturday (on the MMO track) and a party hosted by Artix Entertainment on Saturday night.  If you're in the Atlanta area, we'd LOVE to meet you!  So stop on by and chat.  We'll be selling merch and, as usual, giving away free stuff! (Like the non-member pets in AQWorlds.  What will it be?  Possibly a derp-dragon, maybe sorta?!)

Big SALE news!
And finally, we have some very exciting news!  For the week of August 22nd (that's RIGHT NOW!), our AE game cards will be 15% off in Target stores!  That means they'll be $16.95 instead of $19.95.  Now, I'm not a numbers person (seriously, I took Math for Liberal Arts majors in college.  We did word problems all semester...), but that looks like savings for you to me!  You can also find our ad in the Target circular (the pages of coupons Target sends out). 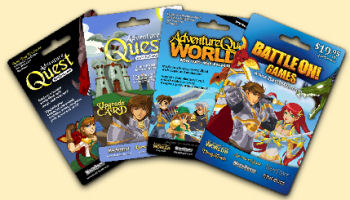