After the the original AdventureQuest was created, I tried making a game to play in my Pocket PC (Because they were going to be THE FUTURE!) The game was called ArchKnight. It was the story of a young boy who dreamed of becoming a Knight... and to become a Knight, all he needed to do was save a Princess. The game was build with bitmap graphics instead of Flash's built in line art for speed... and the art was tiny for the small hand held screen. The humor in the game was unique for its time and the quest style was fun. As you may already know, it is this game that was the basis of the DragonFable project! ... but there was another direction we could have gone. Instead of making DragonFable, we considering making... Chibi ArchKnight. 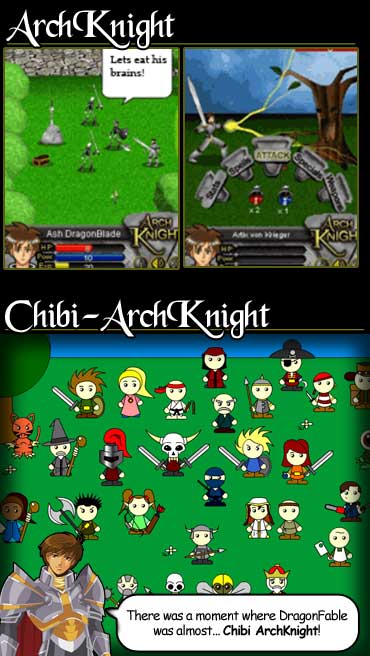 Can you imagine if Ghost, Tomix Oishii & Thyton were all drawing this style instead of DragonFable style? Do not get me wrong... these little chibi characters are cute. I drew them for another 3vs3 chibi combat game that I also made for the PocketPC. Yup, that is right. DragonFable combined the walkaround and cutscene concept of ArchKnight with the 3vs3 combat system that these little chibi heroes used to fight. Zhoom coded the entire thing from scratch over a few months. These were the days before the secret underground lab existed... when AE headquarters was my dining room table. We used to have as many as 9 people come to work at the house. The neighbors were so scared that there were so many cars that they called the police on us.... twice! I remember showing the game concept to the police officer and he said, "Woah. you guys are really making games? Cool!" Check back tomorrow and I will post another tasty treat from this vault of old game files for you! Hmmm, I wonder which one we will pick for tomorrow *dunn dunn dunn*

Forum/Twitter Question: What are you thoughts on the little chibi DF/AQ characters? What would your character look like if you were one of them?