is feeling a little lucky!

Your luck is in! A NEW war system is coming!

It's time for another Sneak Peek Design Notes, and we have one that will make you GREEN with envy. Or maybe that's just anticipation. Which is also a suitable emotion. Feel your feelings, own your emotions! Just take time to analyze them later, because we've got some REALLY important information to pass on!

First up is a Sneak Peek made by Tomix. It's too big to post here on the Design Notes page, so I'll have to link you to it. Let me introduce you to Maeve, Queen of the Minx Faeries!

Take a moment. Study the picture. Reflect, perhaps, on why she is not a teeny tiny little fairy lass like all of the other Minx Faeries you've met in DragonFable. Once you're finished speculating, please do read on:

Maeve is an ADULT Minx Faery! That's right, ALL of the Minx Faeries you've fought in-game are children. At best, teenagers. Dodgy little wing-nuts, aren't they? That's because faery children have a prodigious amount of energy. Can't stay still. That explains their high dodge. As for the healing skill, well, faery magic and a keen instinct for self-preservation are wonderful things.

Bet you're glad you don't have to fight THEM in the war next week! 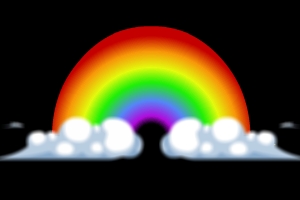 Which brings me to part two of the Sneak Peek! Rolith has made a short (less than one minute) video showcasing some of the new war features you can expect with the Rainbow Bridge war next week! (Like tracking war waves and RARE war waves on your character page from now on!)

Although it's really more of a war-hybrid. You will be working with all of the other DragonFable players as usual to raise a war meter, but this is not your typical war meter! You are re-constructing a rainbow war-meter! Every quest you go on- because in this war, you will battling through existing in-game quests to "raise the war meter"- will drop a rainbow shard which will automatically raise the war meter and bring the rainbow that much closer to containing all the colors a full rainbow needs. (Just be glad you aren't re-constructing a DOUBLE rainbow. It'd take twice as long!)

As usual, we'll be watching your reactions on the DragonFable forum and answering what questions we can!

PS: Geopetal is hard at work on this week's Earth Orb Saga quest! Look for more information about it to come out with the weekly Newsletter.